Both terms Lime Mortar & Natural Cement can be considered “Renders.” They both come from processed limestones that produce serviceable plasters and mortars. So What is the difference? To clarify further, and after much research, I feel it safe to say that the word “Lime” in Lime Mortar indicates that after processing Limestone, a Mortar is produced that is not hydraulic. And where the word “Cement” in Natural Cement indicates that the processing produced a hydraulic Cement.

Then, What does “Hydraulic” mean? In terms of “Renders” it means that after processing, when you add water to the end product, it will actually harden instead of dissolve in water. Meaning that not only does water cure it, after curing in water the material is no longer water permeable!

RENDERS; ANCIENT HISTORY: As we have learned in our coursework, throughout history people will always find a way to make use of what is readily available around them, in order to create shelters such as rock, stick, wood, mud, clay, grass, straw, etc. Both gypsum and limestone are prevalent sedimentary rocks that contain calcium. And, their “renders” produce a very bright white and reflective material that lends itself well for tinting/coloring. We actually get our word Plaster, meaning “to daub on,” from the Greek language and during my research, I read that plaster was used in Greece for interiors and exteriors as early as 500 BC. I also found numerous references that described the many ways Egyptians were making and using gypsum plasters (calcined/heated gypsum and water.) For example, gypsum plaster is believed to have been used as a lubricant to aid in positioning of large stones. And the earliest documented use of lime plaster (burnt lime and water) in construction was found in roughly 4000 BC for plastering the pyramids.

We also have learned how Limestone via “The Lime Cycle,” starts off solid in nature, then becomes reactive with water, then soft and finally after curing, returns to its solid form again. (FYI – Search online for “the lime cycle” because you will discover there are many videos available where you can witness the chemical reactions taking place – So fascinating!) This leads me to this definition…

LIME MORTAR: (lime, water & sand) is a “Render” of Limestone with an aggregate. Derived from the latin word “cæmenta” meaning, “binder of the plaster.”

And, although research cannot yet place a specific date/place of origin, suffice it to say that Lime Mortars were used extensively during the Roman Empire. Reconsider too what Vitruvius wrote,

Keep in mind that because Lime Mortars cure over time via “The Lime Cycle” (that is to say, CO2 absorption & water evaporation) it is important to understand that they are unable to cure in the presence of water, and therefore are non-hydraulic. Interestingly enough though, because they can continue to absorb and evaporate water moisture, they can flex overtime and to some degree, are able to self heal microcracks.

Despite this, and long before more modern hydraulic cements, Romans are known to have used lime and Pozzolan (volcanic ash, or sometimes crushed bricks) to create Hydraulic Mortars – they were found in the construction of ancient Roman cisterns and aqueducts! Ok – so does adding Ash make Lime Mortar Hydraulic? Yes – more on that soon.

RENDERS; MORE RECENT HISTORY : This takes us to England in 1756, when John Smeaton developed a “Natural” Hydraulic Cement using the combination of Blue Lias limestone (a clay containing limestone) and CivitaVecchia (an Italian pozzolan earth). It was used for the reconstruction of the Eddystone lighthouse off the coast of Plymouth, England. Ok  – so does adding Clay make Lime Mortar Hydraulic? Yes but, more on that soon.

Soon after in 1791 & again in 1796, Joseph Parker was granted Patents for his methods and specifications to develop “Natural Cements.” And, by 1798 he was marketing “Parker’s Roman Cement.” Natural Cement continued to be exported to the United States until 1818, when Canvas White returned from England from his studies in construction practices, discovered a deposit of “Cement Rock” in Madison County, New York. This unique deposit produced a hydraulic cement used to build the Erie Canal. Then through continued efforts to locate more mines containing Cement Rock by 1900, the United States had over 70 hydraulic cement producing plants. And overtime, these “Natural Cements” collectively became known as “Rosendale Cement.” Some notable structures built using natural cements include; the Brooklyn Bridge, Fort Sumter, Fort Knox, The US Capital, The Washington Monument and the pedestal of The Statue of Liberty.

RENDERS; MODERN HISTORY : Ultimately even though Natural Cements were used here extensively, in 1976 (with the closing of Fort Scott Hydraulic Cement Co. the last manufacturer of Natural Cement as a finished product,) Natural Cements became all but replaced by Portland Cement, that is generally now simply referred to as simply just, “Cement.” Portland Cement, contains a specific & repeatable man-made mixture of pure limestone, silicates and clays, that “Render” a reliably predictable and reproducible hydraulic cement. It was patented by Joseph Aspdin in 1824.

FYI: Edison Coatings, Inc. has returned to the manufacture and marketing of the original “Rosendale Cement” by mining limestone from the very same deposits – it lives on today, bringing us it’s unique characteristics that are best suited for both preservation needs and modern applications.

ANOTHER LOOK AT RENDERS OVER TIME: Words for, Terms used, & Methods for Making

LIME: The word ‘lime’ refers to Quicklime or Slaked Lime (these are both states or stages of Limestones during “The Lime Cycle”) Lime is widely used to form the binder for mortars, plasters, “renders “ and washes prior to the mid-19th century. Quicklime is produced when limestone is heated in a kiln. Slaked lime is obtained when Quicklime is then combined with water to create a ‘Putty’ (stored in tubs), ‘Hydrate’ (bagged powder) or, ‘Dry-Slaked’ mix (where the reaction takes place in sand.) This leads to my definition…

NATURAL CEMENT: (lime, water & aggregate) is a “Naturally” Hydraulic “Render” aka Cement, where the Lime is produced from Limestone with either “naturally” occurring or added impurities.)

THE  LIME CYCLE OF “NATURAL CEMENT:” 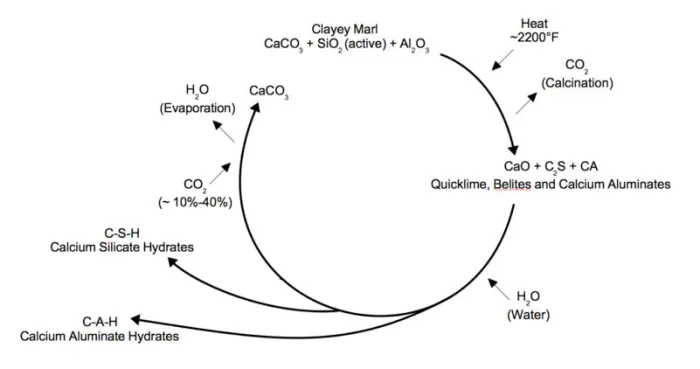 (Illustration: Patrick Webb, “Natural Cement: An Oldie but a Goodie”)

IN SUMMARY : Natural Cement is Hydraulic because the mined Limestone used to produce a render, contains naturally occurring impurities of Amorphous Silicas (structureless/non-crystallized silica) particularly Alumina found in clays. These impurities affect the “The Lime Cycle” such that during the CO2 “off burning,” stage, some of the silicas fuse with the Quicklime to form Belites (calcium silicate compounds) or “Clinkers” that are reactive with water. Therefore…

★ When/if you try to “Slake” Natural Cement Quicklime, instead of bubbling, expanding and becoming a soft putty, the clinkers in the Quicklime react and cause the Quicklime to cure and harden instead!  In fact, it does so quite quickly – similar to gypsum plaster.

In addition to quick setting, Natural Cements also have very strong binding capacities allowing for more variety of aggregates that can be added. Also due to their quick sets, they compress fast and low water permeability, aka hydraulic results. Therefore, if No One Render is Better than Another...

we should rather then consider again my opening remark…

SOME USEFUL TERMINOLOGY :
Amorphous Silica: structureless, “free” silica, not crystallized
Gypsum: a sedimentary rock made of calcium sulfate dihydrate
CaCO3: Calcium Carbonate, an alkaline earth metal °
Limestone: s sedimentary rock mineral of calcium carbonate (millions of years ago, sea creature shells/skeletons became layered as they fell/sank into many layers that have been compressed overtime to form limestone.)
High Calcium Lime: lime containing 95% or higher calcium content
Dolomitic Lime: lime containing a significant percentage of magnesium, takes longer times to slake!
Magnesium Lime: US considers it containing upto 35% Mg Carbonate
“Quick”lime: or “Hot” Lime, is lime freshly burned from the kiln. It is very alkali and exothermically reactive with water and can be dangerous. It is what is left after burning Limestone. The burning of Lime releases CO2 gas from Limestone.
Lime Slaking: the process of introducing just enough water to Quicklime to convert it from a highly alkali oxide to a less reactive hydroxide. “Quenching” applies just the right amounts of water vapor or mist to Quicklime making it less caustic, forming “Hydrated Lime.”
Hydrated Lime: Lime that has be Slaked, typically it is still dry and has a clinker of reactive silica compounds that will set/harden with water. Can be set with the addition of a certain percentage of water.
Clayey Marl: Marl or marlstone is a carbonate-rich mud or mudstone which contains variable amounts of clays and silt. The term was originally loosely applied to a variety of materials, most of which occur as loose, earthy deposits consisting chiefly of an intimate mixture of clay and calcium carbonate,[1] formed under freshwater conditions.
Clinker: cementitious compound that forms when amorphous silica fuses with quicklime during the burning process that makes quicklime. “Clinkering” process creates cementitious compounds.
“Hydraulic” Lime: from limestone with reactive silica and aluminium impurities. These have a harder set, as calcium silicates and aluminates form in the presence of water in addition to any calcium carbonate from carbonation. Natural hydraulic lime is classified as NHL 2, 3.5 and 5. (During slaking hydraulic limes, only enough water is added as needed to “quench” it and, not so much as to initiate the hydraulic reaction. Most hydraulic limes sold commercially are both hydraulic and hydrated)
Non-Hydraulic Lime: from relatively pure limestone. This hardens only by carbonation. It is classified as CL under European standards. The purest is described as ‘fat’, the less pure as ‘lean’. Impurities in the latter impart a slight hydraulicity but insufficient for it to be called ‘hydraulic’.
Pure Lime: “non-hydraulic”, “air lime” or “putty lime” They will not set in water, they “cure” over a long period of time by slowly reabsorbing CO2 from the atmosphere.
Lime Putty: non-hydraulic lime that has additional water so as to form a thick paste