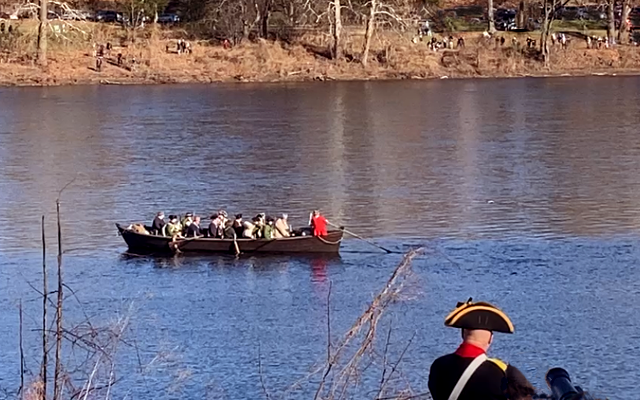 After many trips to Washington’s Crossing, PA over the years, in December 2021, I finally did so for the sole purpose of witnessing the celebrated reenactment of the historic Christmas crossing of the Delaware River. Thankfully on this day, the temperature was mild in comparison, and not a sign of ice could be found. Regardless, it took little imagination to see for ones self, the sheer bravery required to choose, let alone execute, the plan of attack that required Washington’s troops to cross.

As I was reflecting on the sights of the uniformed men slowly, peacefully crossing, the impact of the experience was made deeply meaningful to me thanks to the passionate delivery of narration read aloud by this years hosted speaker, author Patrick O’Donnell. Taking his time, as were the careful troops, I began to pick up on the underlying message of his words. Being that success for Washington, was more than precise planning, grit or the weather of that historic night. Patrick was sharing some of the qualities and makings of the men that worked for and in Washington’s favor, time and time again.

Being a wise man himself, and from within the warmth of the park’s Visitor Center, Patrick also gave a brief discussion on these lesser known hero’s he wrote on behalf of, afterwards. As he shared hints of the many lives worth of contributions the men gave to all of us, the audience comfortably gazed at the auditorium’s magnificent reproduction of Emanuel Leutze’s iconic painting “Washington Crossing the Delaware” behind him. (“A Tale of Two Paintings” A brief history of Robert B. Williams‘ reproduction at Washington’s Crossing Park. https://www.washingtoncrossingpark.org/a-tale-of-two-paintings/)

No doubt you too will enjoy reading about the Marbleheaders of Massachusetts because, the book is much more than a rehashing of history already so well written about.

Sub-titled, “the diverse soldier-mariners who shaped the Country, formed the Navy, and Rowed Washington across the Delaware,” the book well segments the history of the Revolutionary War era into digestible chapters that read in a very “story like” manner. But, don’t be fooled! It is actually quite jam packed with facts that Patrick assembled from his impressive, and extensively researched source materials, all listed in the index. Historic dates, places, and personal accounts, are so nicely weaved into his narration, that you easily convince yourself safe to read on by thinking… “I’ll look up more on that later.”

It is also worth expressing that, despite the inclusion of so many facts collected, I did not find it to be an exhaustive, comprehensive accounting of all the events. Instead, the detailing of events are felt as the context by which we can come to know the souls who lived these events and how their places in the world, uniquely effected outcomes. This perspective, makes for a refreshing read of a topic that for some, may seem already too well understood.

In support of the immense collection of reference materials indexed, many of the events, travels and battles are clearly diagramed via custom illustrations as well as choice images and photography. Even if you are not a visually inclined consumer of information as I am, the custom maps allow you to better understand the difficulty and expansive time needed for troops to move at that period in history. And personally having yet to witness a battle reenactment, Patrick’s writing is such that I now understand when timing worked towards & how strategy was designed or intended to prevent what I always imaged as constant and pure chaos.

Probably the most endearing and deeply moving result of having completed this hard to put down book was, how it left me with a caring understanding of who “they” were. The story of their persistence to fight for freedom, has humanized them as individuals in my lifetime. Widely and collectively known as “The Marbleheaders,” this tightly bonded family of men, is now also documented in history for having earned their claim, as George Washington’s “Indispensables.”